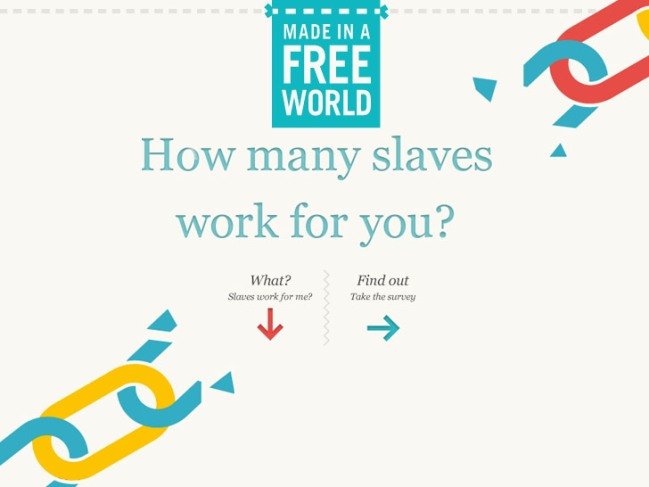 The film 12 Years a Slave —  based on the memoir of Solomon Northup, a New York State-born free African American man kidnapped in Washington, D.C. and sold into slavery in 1841 — received even more critical acclaim after winning three Academy Awards, including Best Picture. But slavery is far from being history, and is in fact incredibly prevalent around the world.

Recently I was enlightened to just how much modern-day slavery drives my lifestyle. SlaveryFootprint.org offers a free survey-style quiz to determine, based on different areas of consumption: food, clothing, electronics, etc. — approximately how many slaves ‘work’ for you.

My result was 50. I do not know their names, or faces. And neither does most of the international community. Conservative figures estimate that there are 27 million slaves worldwide (roughly equal to the entire combined population of Australia and New Zealand). The abolition of slavery unfortunately did not mean the end of the slave trade — only its visibility.

It is rather disturbing to visit the website and do this activity, with all its bright colors and aesthetically pleasing graphics — until you realize just what it is you’re unveiling. The quiz ends by asking if you would like to send notes to the various companies that have ties to slave labor, given that so many of the so-called ‘licit’ or legal trades we engage in on a daily basis are linked to this cheap, profitable and ‘illicit’ trade.

Try taking it for yourself. How high is your number, and what areas caused it to spike? Respond in the comments below, and please share any efforts you’ve heard or taken part in to expose and prevent slavery.