Tal Aizen knows firsthand the impact an organization like the Wounded Warrior Project can have. Soon after joining the Israeli army last year, a back injury left him in a wheelchair for six months.

“I was lucky. I got sort of fixed,” Aizen said. “These guys are missing legs. They need the help.”

Aizen was released from the hospital last July, and thanks to a back surgery he can once again walk and run. The Wounded Warrior Project is one of more than two-dozen charities on the Charity Miles smartphone app, which tracks a user’s distance to determine the amount of money a sponsor will donate to a cause. Biking earns 10 cents per mile, while running and walking earns 25 cents per mile.

“I wish I could go back to my job there [in Israel],” Aizen said. “I miss the guys there. I miss everything. The running deal is sort of helping me overcome it all.”

A personal story also inspired Gene Gurkoff, the founder of Charity Miles. He ran marathons for nine years to raise money for Parkinson’s research in honor of his grandfather, who has the disease.

“I always wanted companies to sponsor me but I could never get them to do that because I’m just an amateur athlete,” Gurkoff said. “But I figured if I could get enough people together then we could all become sponsored athletes, just like the pros, but for charity.”

IC Charity Miles is one of the first college campus organizations to base their mission around the app since it was founded two years ago. It held its first 5K event Sunday on the trails of the South Hill Natural Lands.

“I just think it’s amazing what [IC Charity Miles Co-Presidents] Rachel and Kelly have done to step up and lead the charge at Ithaca,” Gurkoff said.

Giving Back While On-the-Go

The trend of ‘mobile philanthropy’ has been increasing rapidly in recent years. In the U.S., one in three people use a mobile device as their primary source for accessing the Internet. And globally, PayPal reported the total value of mobile donations through their service in December 2012 was 242 percent larger than in December 2011. Dozens of apps like Charity Miles can be downloaded to support non-profits while on the move.

Some have criticized movements on mobile devices and social media as a form of ‘slacktivism’ – slacker activism – that may be easy to take part in, but ultimately disconnects people from the cause and real volunteer service. But for ICCM founder and co-president Rachel Gray, the app also promotes awareness.

“It does have the big name charities, like for Alzheimer’s or Leukaemia and Lymphoma, but there are so many charities I had never heard of, like Red White and Blue,” Gray said. “You’re donating your time to this charity through running, and you’re getting fit while doing it, but at the same time I think it’s a way to spark interest.”

Gray points out that users can watch short videos each time they choose a different charity to find out more about what they are supporting, and then become more involved if it is something they are passionate about. 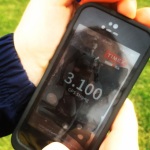 The app is not without some minor drawbacks, however. The GPS-tracking feature drains battery power faster than normal usage, which can be a problem for longer walks and runs. And, unfortunately, those without smartphones currently cannot take part in the fundraising. Still, IC Charity Miles members like Marissa Fortman think it is important to support the cause.

“The whole data plan thing is [expensive], but if you have it and you’re going to be walking or running around, it’s so easy to just turn it on and do it,” she said. Fortman stood as one of the volunteers directing 5K participants at each quarter mile mark.

Gray said the group plans to expand efforts in the Ithaca College community in the future. Their goal is to hold a 5K at least once a semester, and are already thinking about hosting a “Turkey Trot” for the fall and branching off to form a running club for students to join.